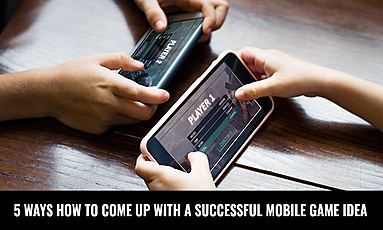 Where to get an excellent mobile gaming concept? A few brilliant coders were needed to create some of the greatest works of art in the world. Even more so, throughout the history of mobile gaming, there have been occasions when the credit was given to the individual who had an inspirational concept but no substantial expertise. A profession in mobile game creation may be both financially profitable and personally fulfilling. How could this have happened? What is the secret to finding the concept video game that captivates and enthrals you? What follows is a brief yet in-depth discussion of the subject at hand. We’ll do our best to make everything as straightforward as possible and provide you with some helpful pointers.

There’s a strong feeling of immediate satisfaction in everything when it comes to mobile devices, and games are no exception. But, according to popular belief, most downloaded applications are removed within one minute of being launched. So, when a person downloads a program, and it does nothing for them, or if they don’t like it, they’re unlikely to remain around.

Don’t bombard the user with your money sources straight away, and do something early in the game that catches their eye. You’ll have a far better chance of staying on a player’s phone or tablet beyond the first minute.

Massive, complex games transferred from consoles and PCs seldom function well on mobile devices. In-depth games have their fans, but most people prefer games that they can pick up, play for a few minutes and then put down. So even if your game has a lot of complexity and length, you should make it optional for people who only want a short fix.

Most people play games for one of two reasons, either to escape reality or to get a new perspective on the topics they’re already familiar with. You may draw inspiration from the actual world to develop concepts that will work for both of these groups. Look for activities that people can’t do in real life but would want to do in a virtual environment to acquire game ideas for the first group.

Things like beating 15 people at once or slaying a fire-breathing monster with a magical weapon are possible. Find inspiration for the second one by searching for the banal in real life that you can make fascinating in a virtual environment. Parking a car or operating a farm are examples of this.

Design a captivating and engaging gaming experience. It is appropriate to resort to the fundamentals of game theory if your game has too many complex controls. On the other hand, make sure you don’t overload the user with too many choices by creating tutorials and progressively teaching them how to utilize each feature.

Make sure your game’s images and 2D animation services don’t become pixelated on high-resolution phones or huge devices like tablets. This is a crucial precaution to consider in mobile game creation. Designing for the maximum screen size and resolution will ensure that you don’t lose picture quality while scaling down or scaling up. This is because it is simpler to shrink than grow without losing quality.

Don’t hold your breath waiting for the game to begin just because of the design and the inclusion of social media. Begin the process of a successful launch right now. To start gaining momentum, target influencers and gaming communities. Keep introducing personalities and levels to keep users engaged. In addition, you should begin a development and walkthrough blog to guarantee that your app gets discovered, downloaded, and branded. Using in-app adverts may also help you get more downloads since gamers are more willing to download games that they already play.

It’s hard to come up with new gaming concepts. Many approaches to generating game concepts exist, but only a handful of them will work for you. However, it’s advisable to experiment to find the best strategy for you. Start by experimenting with each of the methods above for a certain period and see what game concepts you can generate. You may come up with excellent ideas if you compare the different approaches.

ZVKY Design Studio is one of the best game developers in India. Over the previous decade, its artists, animators, designers, and developers have worked on more than 650 games and applications. A high-quality final result is our speciality, and we specialize in enhancing and assisting our clients in realizing their vision.